Help the scientists to uncover where the gulls travel

Help the scientists to uncover where the gulls travel

Over 10 species of gulls can be found in Bulgaria. Of these the Mediterranean Yellow-legged Gull or "glarus" as it is called in Bulgarian, is the most widespread. Like all species of gulls, it has a very interesting biology and behaviour as well as very complex taxonomy. Already several times scientists altered the name and its status. A team of the Natural-history department by Regional History Museum in Burgas, has set itself the task to unravel the complex picture of its migration.

We are all used to see seagulls all around us and take them for granted, but in fact we know so little about them.
As typical marine species, gulls nest on a rocky coasts, lakes and islands by the Black Sea coast. In the past century, however, the birds found that cities offer many convenient places for breeding, the food resources available all year around and no natural enemies. Therefore, some seagulls began to nest on the roofs of houses and the population of this species split. Today, many more birds settled in the coastal cities and only few pairs stay on the hard, rocky places away from the towns.

The Islands of St. John and St. Peter near Sozopol are home to the largest colony of Mediterranean yellow-legged gulls in Bulgaria, located on the old natural nesting sites. Each year between 500-700 pairs nest on this place. In July and August the young birds leave the islands and embark on its first flight. Initially, they just wander among the places where they eat and rest. 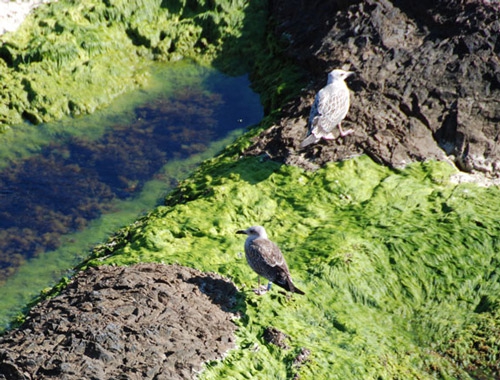 Young gulls reach sexual maturity first at the third or fourth year. Until then, they wander over long distances. Carried away by flocks of other species of seagulls, they leave Bulgarian territory and circling around the neighbour countries. After 2-3 years they return to the places where they were born to find a partner and raise a generation.

But where were they wandering during those years, which places they visited, how many young birds fail to return to their homeland? All these questions tease the curiosity of scientists. Universal method of studying bird migrations is the marking with metal rings, which have a code unique for each bird. Thus, by the re-capture, finding or seeing a marked bird the scientists receive information about its movement and life span. Therefore, the tagging of young gulls on the island of St. John began 10 years ago. Unfortunately, little information is returned.

Since 2012, the Regional Museum of Burgas is working on a project for the tagging of gulls from the island of St.John with plastic colored rings. The unique code on these rings can be easily read with binoculars or on a picture of the bird taken with a camera without the need to re-capture it. Although in the first year of the project the ringed birds were only about 400, the reports that scientists gathered in one year are more than all the previous years. Our birds were detected repeatedly in Ukraine, Turkey and in various places on the Bulgarian coast. In June 2013 the staff of the museum joined volunteers from the archaeological and nature conservation society TERA - Burgas, FPS "Green Balkans" and the Bulgarian Ornithological Centre. More than 485 small gulls were marked, using the new blue rings with white code, consisting of combinations of letters and numbers. Soon the birds will leave the island and take on their way.

Every observation of bird with blue ring is very important in order to uncover the secret of the gull's ordeals. Probably the first people to see the ringed birds will be the residents and guests of Sozopol.

If you see such a bird, try to read the code on the ring or send us a picture. The team of the Natural-history department of Regional Museum Burgas awaits any information.

„The Wild World of the Eastern Rhodopes“ is in Burgas