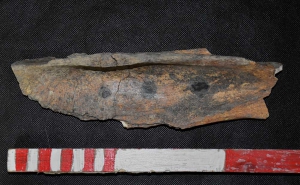 In 2020, Burgas archaeologists exploring the medieval city of Rusokastro discovered a very unusual find. This is a horse's shoulder, which is deboned after cooking. Three round prints were then burnt on it, probably with a hot metal object of round cross-section. Archaeologists have been convinced since its discovery that it was an object used in some ancient magical ritual. It is clear that the horse bone was used for divination; hot iron touches the shoulder blade, and the fortune teller looks from the other side at how the bone is cracked due to the high temperature, and thus he made his predictions. This type of divination is known as scapulomantia. Parallels of this practice have been found among the peoples of Central and East Asia, especially in China, where this method of divination was most popular.
Exactly in China that thousands of bones have been found, but ox bones used in such divination practices. This method is also common among the Buryats, Mongols, Kyrgyz and Kalmyks.
If such divination is characteristic of the peoples of the Asian steppes and China, what does this horse bone in Rusokastro do? According to researchers D. Fartunova and M. Nikolov, Indeed, a careful study of historical sources fully confirms this hypothesis.this horse bone is evidence of the presence of Mongols (Tatars) in the fortress in the XIII-XIV centuries. It is documented that in 1326 a large Mongol detachment, mercenaries of the Bulgarian King (Tsar) Michael III Shishman Assen, set up its military camp near the medieval town of Rusokastro. Even at the battle of Rusokastro in 1331, a detachment of Mongols joined the Bulgarian army here and with their help the Bulgarians defeated Emperor Andronicus III Palaeologus. The scientific report on this unique find from the Balkan Peninsula, and perhaps in Europe, which is already stored in the Burgas Museum, has been approved for publication by the editorial board of the scientific publication of the National Museum of History.