Head of a diadumenos stone statue and monumental structures from the Roman period are only some of the surprises for the archaeologists in the last month of excavations in the ancient bathing complex Aquae Calidae.
<module="album" id="226" width="810" height="600" cell_height="150" cols="4" image_crop="1" crop_color="0,0,0">

The team is examining the burned layers from IV-VI century in 4 to 6 m depth from the current level. Inside them were found mainly pottery and coins from the time of Constantine the Great - the first Christian emperor. Most of the coins found this season, namely belong to the commemorative series, minted for the proclamation of Byzantion for the new capital of the Roman Empire by Constantine the Great.

15-20 m away from the space allocated for studies this year the specialists uncovered impressive monumental architecture. The remains of it will be subject to further research in the final stage of the excavations this summer as the area requires special attention.

Another surprise for the researchers is a wall with thickness of 3.6 m. It is located in the northern part of the site, in which Tsonya Drazheva found part of a street and thick columns in 2009. The massive wall - landing was revamped at a later stage in to entrance area and the material of it is reused for paving. At the uphill there are revealed several pipelines from the late antiquity which supplied the bath with cold water. The mixed layer contains a large amount of broken marble sculpture. They were used as adorned of the Roman bath in its heyday, complementing the rich lining of the inner halls. 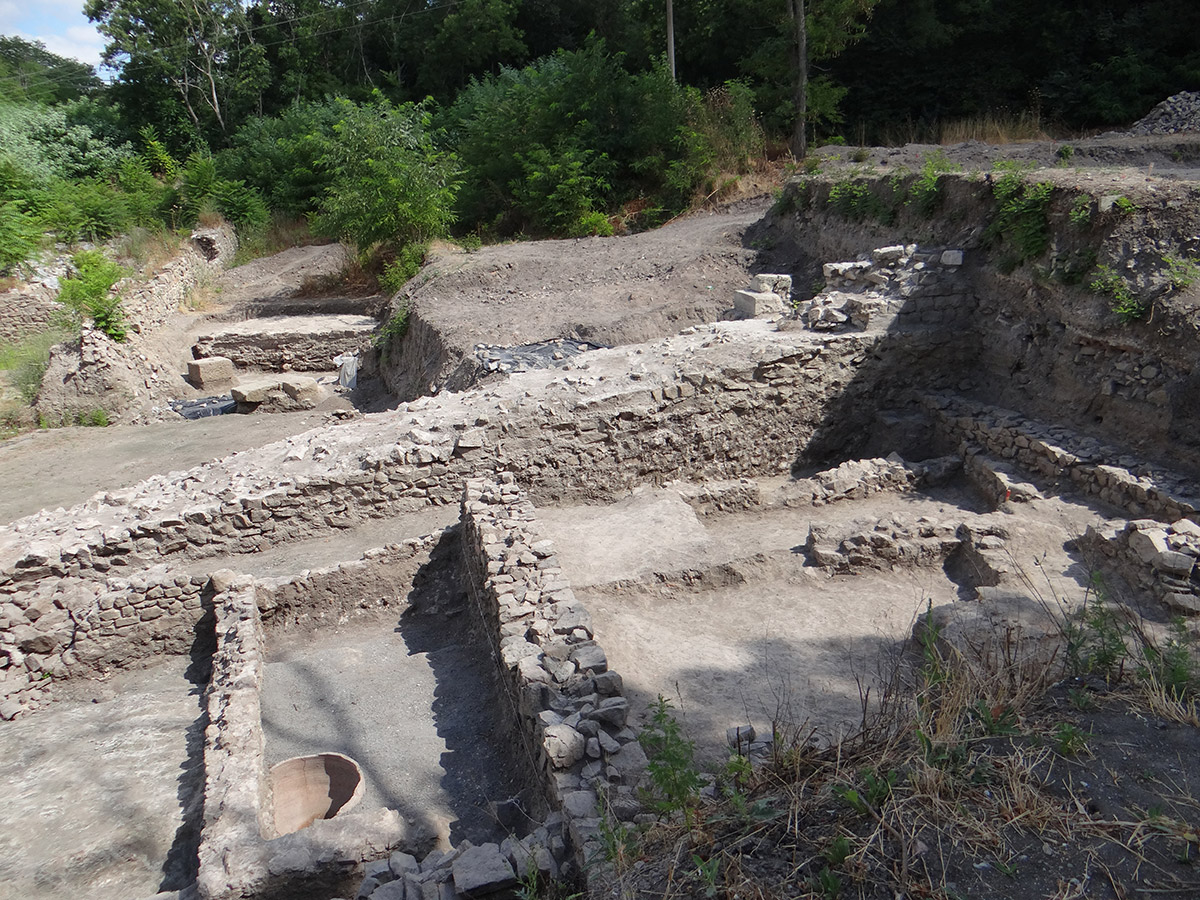 Among the most striking findings is a head with diadem of a large stone statue that depicted a person of the highest rank.

The excavations this summer confirmed the great importance of Aquae Calidae for the history of our lands during the IV-VI century when the barbarian tribes of Goths and Avars entered the Balkans. According to the head of archaeological research in Aquae Calidae - Assoc. Prof. Dimcho Momtchilov, there is no doubt that the fires of the IV century, date back to the Gothic attacks and their permanent settlement here. This is determined by the revealed back in 2012 burials in layers above the vestibule of the Roman bath. At the same time burned buildings in the layers of the VI century are associated with destruction after the raids of Avar tribes, led by Khan Bayan. This is evidenced by the monogram discovered in 2014 of the famous Byzantine general Kast, who fought the brutal barbarians for years.

All visitors of the tourist complex Aquae Khalid can see the work of specialists-archaeologists from a safe place at the atrium. The archaeological studies conducted by the Regional Historical Museum Burgas will resume next week.