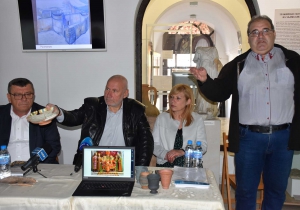 With increased interest from tour operators and the media, a press conference was held today on the occasion of the new permanent exhibitions, new exhibitions, archeological excavations and tourist attractions organized by RIM-Burgas for the new season this year. Held traditionally in the the middle of May, "European Night of Museums" this year will launch the summer program of the Regional History Museum of Burgas. In the "Night of Museums", May 21, 2022, the expositions of RIM-Burgas will present their new exhibitions for the summer season. Visitors will have the opportunity to view the permanent and visiting exhibitions from 18:00 to 00:00, with free admission. In the Natural and Science Museum - (30 Konstantin Fotinov Str.) On the Night of Museums, visitors will be able to see the new permanent exhibition "The World in a Grain of Sand". It presents a collection of coastal sands from around the world, which the museum has been collecting for 8 years and which is the only one in Bulgaria. In the showcase are arranged the most interesting artifacts from all continents, incl. Antarctica, from different beaches - golden (Copacabana in Brazil), green (Papacolea beach, Hawaii), white and pink (Bermuda, Bahamas, Barbados and Cuba), black (Greece, France, Costa Rica). Most are the sands of sea beaches, but there are rivers and deserts (Sahara, Arizona, Utah, Dubai).
In the Ethnographic Exposition - (12-14 Knyaz Alexander Battenberg Street), visitors will have the opportunity to see the exhibition "Nestinarstvo - Bulgarian magic with fiery embers" - 11 boards with photographs from 1946 and 1953, which present in detail the Nestinari festive day, on June 3 in the village of Bulgari and its culmination - the dance on the embers. The exhibition "Medieval sgraffito ceramics from the Bulgarian Black Sea coast" will be presented at the Archaeological Exposition (21 Aleko Bogoridi Blvd.). This is the first and only such exhibition of its kind, which presents the most elite specimens of medieval artists from the Black Sea coast from the XII - XIV century. These are dishes, bowls and bowls with different images - plant, geometric, animal and more. Among the exhibits are such world monuments as the leopard(bars) from Rusokastro, the deer from Balchik and the panther warrior from Sozopol. The exhibition is cooperative, of the museums from Balchik, Varna, Nessebar, Pomorie, Burgas and Sozopol.
In the Historical Exposition - (31 Lermontov Str.) Opening of a guest exhibition "Monastery Culture of the Balkans" by IM - Samokov. The exhibition will be a guest throughout the summer season. The exhibition presents the monasteries and monastic culture of the Balkans through 30 photographs from various Balkan monasteries. "Monastery Culture in the Balkans" is a small but representative excerpt from the photographic work of Prof. Mihail Enev. He is credited with promoting, researching and preserving the spiritual heritage of Mount Athos - Mount Athos.
For the summer season Regional Historical Museum - Burgas has prepared a lot of attractions. At the Archaeological Museum, visitors will be able to view the exhibition, tasting wine from local winemakers. The glasses that will be used for tasting are replicas of original wine glasses from prehistory, Greek and Roman antiquity, as well as from the Middle Ages, discovered during excavations in ROME - Burgas. There will also be a photo zone in the Archaeological Museum. In a specially made art installation, visitors will be able to be photographed in the form of emperors depicted on an ancient coin. There will also be a photo corner in the Ethnographic Museum. The museum offers a veil with an original head scarf from the village of Lyulyakovo, with which visitors will be able to take pictures at the camp of the exhibition. A similar photo location will also be set up at the History Museum. There will be a separate retro corner from the end of the 19th - the beginning. of the 20th century, where visitors will be able to take a photo with a replica of a typical for the period women's hat. In 2022, Regional Historical Museum-Burgas plans a series of archaeological excavations. Excavations at Aquae Calide, in the area of the northern wall of the Roman baths, will continue. These excavations are fully funded by the Municipality of Burgas. Underwater research will also continue. Two expeditions will be made - one from the Center for Underwater Archeology, which will work in Foros Bay, and a united one, between NIM and RIM-Burgas, which will work in Chengene Scelle Bay and near Cape Kaba Burun. Both underwater expeditions are funded entirely by the Municipality of Burgas.
It is planned to continue the archeological excavations of the medieval town of Rusokastro. There you will explore the well of the castle, as well as the secret passage with the tower-well at the northern wall of the medieval city. The excavations will be financed by the Municipality of Kameno; RIM-Burgas has also applied for funding to the Ministry of Culture. For the first time, two of the last finds from the Rusokastro fortress were shown. One artifact is a ceramic vessel with a leopard image (bars). The image is on a large dish, made in the sgraffito technique. The Ceramic Court is part of the exhibition organized by RIM-Burgas "Medieval sgraffito ceramics from the Bulgarian Black Sea coast". The other unusual and remarkable find is a horse bone, which was used for divination; hot iron touches the shoulder blade, and the fortune teller looks from the other side at how the bone is cracked due to the high temperature, and thus he made his predictions.
A special guest at the press conference was Associate Professor Doctor of Historical Sciences Nikolay Ovcharov - the explorer of Perperikon, Misionis, the castle in Visegrad and many others. etc. He is present as an expert, very impressed by the medieval town of Rusokastro. Assoc. Prof. Ovcharov presented his latest research on the battle of Rusokastro in 1332, which found a place in his latest book "Tsar Alexander Assen. The peacemaker. Also present were the Mayor of Kameno Municipality Zhelyo Vardunski, the Deputy Mayor for Culture, Tourism and Sports in the Municipality of Burgas Diana Savateva and others.