What are the paths to Liberation tracks the latest book by Prof. Dr. Petko St. Petkov

What are the paths to Liberation tracks the latest book by Prof. Dr. Petko St. Petkov 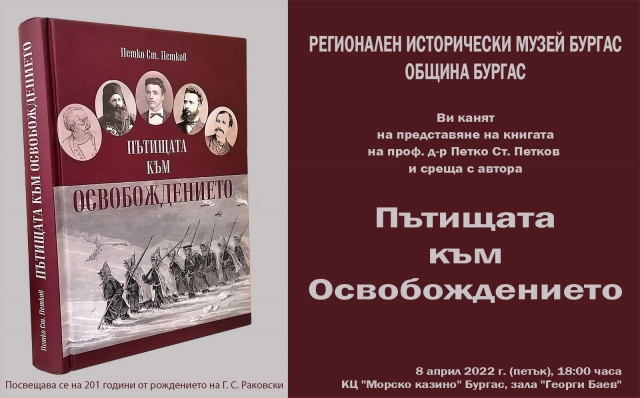 The historian, at the invitation of Regional Historical Museum-Burgas and with the assistance of the Municipality of Burgas, will present his new edition on April 8 in the "Georgi Baev" hall of the “Sea Casino” Culture Centre.

This book contains selected studies and articles by Prof. Dr. Petko St. Petkov from 2009 to 2020 and presents his scientific research and achievements over the past decade. It is a natural continuation of the two published collections of his studies and articles from previous years: "History as Polyphony" (2005) and "One Hundred and More Years Ago" (2009).

Prof. Dr. Petko St. Petkov is a longtime teacher at the Faculty of History of the University of Veliko Tarnovo "St. St. Cyril and Methodius ”. He is the author of monographs, studies and articles, textbooks and teaching aids on the new history of Bulgaria. There are several ways to the Liberation, understood as the creation of an independent, modern state and including all Bulgarian lands, and to the political denouement as we imagine the Russo-Turkish War of 1877-1878, but beyond. After the great changes imposed by the final Treaty of Berlin in 1878, the roads to the Liberation for the five parts of the Bulgarian land, which already have different status, are divided and for some large groups of Bulgarian population and parts of the Bulgarian lands will never reunite. Therefore, the book includes both the author's publications for the period until the creation of the new Bulgarian state in 1879, and for the next stage of the new Bulgarian history - until the great historical changes that occurred after the wars of 1912-1919. The ideal of Liberation, i.e. for the creation of a unitary, modern and independent Bulgarian state was finally formed in Bulgarian society in the third quarter of the nineteenth century. And because it does not realize in 1878-1879, it continued to be chased in the following years, but under significantly changed conditions, and already different for different parts of the Bulgarian community, divided into several countries. Therefore, the paths to the Liberation, that is, the aspiration of the common ideal, did not end either in 1878-1879 or in 1913, much less in 1919.