The smallest representative of the order Cetacea in the Black Sea is the harbour porpoise (Phocoena phocoena relicta). The waters of the Bulgarian Black Sea and the entire Black Sea basin are inhabit by three cetacean species. The three species have different numbers and conservation status. Due to the semi-closed and isolated nature of our sea, they have evolved as endemic subspecies: Black Sea bottlenose dolphin (Tursiops truncatus ponticus), Black Sea Harbour porpoise (Phocoena phocoena relicta) and Black Common dolphin (Delphinus delphis ponticus). The three species are protected by the Biodiversity Act of the Republic of Bulgaria and a number of international agreements.


<module="photo" id="1596" maxwidth="300" maxheight="150">
Black Sea harbour porpoise (Phocoena phocoena relicta) is a representative of the suborder toothed cetaceans. Its teeth are laterally compressed and not conical as in other cetaceans in the Black Sea. The lack of so-called "beak" is making it easy to distinguish this species from the other Black Sea cetaceans. The dorsal fin is short and rounded. The harbour porpoise reaches a length of 1,7 m and weighs 55-65 kg. It lives in small groups of up to 10 individuals and does not jump over the water, making it very difficult to notice their presence, even when the water is calm. The Black Sea porpoise often rests (but not do sleep) by drifting relaxed on the water surface.

Relict porpoise is very vulnerable to accidental entanglement in fishing nets and to water pollution. This combined with its low reproductive capacity - a female can only give birth to 3 or 4 babies in a lifetime, which leads to a drastic reduction in the number of species in recent years.

Based on a series of studies of cetaceans in different parts of the Black Sea, the population of Phocoena phocoena relicta is tentatively estimated at approximately 10,000 individuals.

In the IUCN Red List the Black Sea harbour porpoise is listed in the category "endangered".


[1] Endemic species are species, the spread of which is limited to a certain area - a geographical area, mountain, basin, etc., as well as state or other administrative unit.

"The Mysterious World of Dolphins" is a film directed by Cvetelina Atanasova It presents the three cetacean species that occur in the waters of the Bulgarian Black Sea coast: Harbor porpoise, Common dolphin and Bottlenose Dolphin. The film is is part of the "National Week of the dolphin 2013" taking place under the initiative of the Bulgarian Ministry of Environment and Water to support the Conservation of Cetaceans of the Black Sea and is carried out by the Black Sea NGO Network. 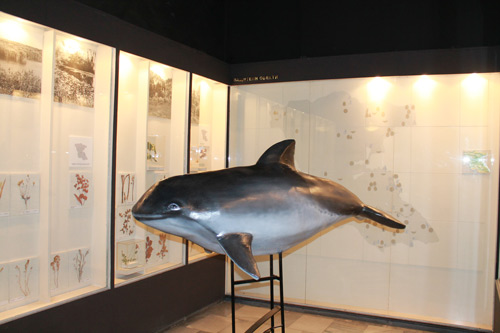