Offshore Salt Lake Atanasovsko is divided into two by a sand strip, the northern part is a nature reserve since 1980 and the south is used as a buffer zone. The lake is 9.5 km in length, width - 4.3 km and reaching a depth of 0.8 meters, salinity has ranged from 20 to 27.5 percent. A considerable part of the area, 1,690ha has been maintained as a saltern since 1906, preserving the old way of salt production.
Atanassovo Lake is a Ramsar-wetland that is of global importance for the ornithology and it is also called the European Bird Paradise. There are 317 bird species found, which makes 70% of all bird species in Bulgaria. Of these, 14 are globally threatened, 83 species are included in the Red Book of Bulgaria and 170 species are of European environmental significance.
Atanassovo lake is located on the old migratory route Via Pontica. It is a typical place with a narrow front for a large amount migratory birds coming from the continent. Most attractive for the bird watchers is the migration during August – October and the winter months are best for monitoring the worldwide endangered small cormorants, stiff-tailed ducks and dalmatian pelicans.
The lake is inhabited by the world smallest mammal - Etruscan Shrew (Suncus etruscus), weighing only 2 grams. 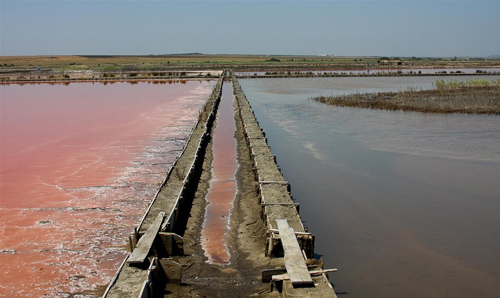