We see it all around us, take it for granted, but in fact we know so little about it. Each year, we invade its dominions without noticing this extraordinary bird that can rightly be called the ruler of our seaside resorts.

In Bulgaria live over 10 species of gulls. Of these, the seagull (bg: Glarus), as people call it, is the most widespread. The taxonomy of this species is actually very complicated. Several times the researchers changed this species' name and status. According to recent research, it has its own taxonomic name Mediterranean Yellow-legged Gull (Larus michahellis).

<module="photo" id="1010" maxwidth="300" maxheight="300">
The wingspan reaches 146 cm; the back and wings are gray as the longest fly feathers are black with white spots on the tops. The wings are broad and pointed, characteristic for excellent pilots. The rest of the body is white. Their beak is massive, its tip is curved downward. Under the beak there is a red spot and around the eye is a red circle. The legs are yellow with web-feet. The young birds are speckled with predominate brown tones, while the colour of adult birds is more white with different shades of gray and black. All gulls are characterized with age and seasonal dimorphism, ie their plumage varies depending on age and season.
As a typical marine species, once the yellow-legged gull nested on cliffs, beaches and islands along the Black Sea coast. Over a century ago, the birds found that cities offer many convenient nesting places and food is abundant throughout the year. In addition, their natural enemies don't live there. So some of the Mediterranean yellow-legged gulls began nesting on the roofs of houses and the population of this gull species split. Today, many more birds settled in the coastal cities and only on separate pairs remain to breed on inaccessible, rocky areas.

One of the last remaining natural nesting places of the Mediterranean Yellow-legged Gull are the islands of St. John (bg: sveti Ivan), St. Peter (bg: sveti Petar) and St. Thomas (bg: sveti Toma) near Sozopol. Here these birds breed in large and noisy colonies numbering several hundred pairs. The construction of nests starts in late March. The actual nest is hidden in the grass or sheltered under some bush or among the rocks. They look like a shallow hollow, covered with grass stems, feathers and pebbles. Because nests are built on open land, as additional protection in species evolution was formed a special colouring on their eggs. The full clutch consists of 2-3 eggs from dark brown to bluish, dotted with many dark colour spots in different sizes. Amid the rocks or dirt, these colours makes them invisible to predators. When the time to hatch approaches, a network of bumps is formed in the egg shell that soon will turn into cracks. The little has on its beak a swelling called egg tooth. With it the chick drills a hole in the shell, which gradually expands. The release from the egg is not an easy job. It lasts several hours and cost a lot of effort. So once the little one is out of the shell it needs some time to regain strength. During this time its down dries and the chick seems no longer so helpless. The gull chicks are nidifugous. This means that several hours after they hatch and dry, they can already walk and leave the nest. Their colour is very similar to that of the eggs and hides them well out of the sight of potential predators. However, the first day they spend in the nest and adult birds come several times a day to feed them. One bird stays in the nest to keep them warm while her partner search for food.

During the hot months, the cliffs and the roofs of the local houses become very hot. Huddled near chimneys or small shrubs the silver gulls try to hide from the scorching rays of the sun. They use even the smallest possible shadow. Sometimes even trying to hide under the old bird in the search for coolness. They gasp from the heat and their beaks are constantly open.

Although we are accustomed to seeing them all year around us, the Mediterranean yellow-legged gulls migrate as the swallows, storks and other migratory birds. Of course their flies are much more modest. Initially, they just wander between places to eat and rest. Although these places are most often located only a few kilometers away of each other, every day seagulls strolls in groups of ten - fifteen birds ordered in irregular triangles.
Soon after leaving the nest the young gulls begin another kind of wandering. As they reach sexual maturity first in the third or fourth year, for that time period they wander long distances. Taken by flocks of other species of gulls they leave the territory of Bulgaria and the circle the surrounding countries. The birds will return to the places where they hatched to find a partner and raise offspring. Sometimes they find partners elsewhere, but then return together to Bulgaria in order to breed. This interesting case was observed years ago in the city of Burgas. In the center of the city a pair nested on the roof of a house opposite of hotel Bulgaria. Ornithologists from the Bulgarian Ornithological Centre (section of BAS responsible for the study of bird migration in Bulgaria) noticed that the male bird has a ring on its leg. As the seagull could not be caught, a few people "armed" with binoculars were able to read the inscription on the ring. So it became clear that the bird was ringed in Greece when it was young, but later came to the Bulgarian city in order to breed.

But we still do not know exactly where our yellow-legged gulls wander. To answer this question for the first time this year, small Mediterranean yellow-legged gulls hatched on the island of St. John, were marked with collared rings. These rings have been purchased under the project of Burgas Museum and Foundation "America for Bulgaria", and with the financial support of Ekotan ltd. They are blue with white letters and numbers that make a unique code, which can be easily seen from a distance without the need to capture the birds. Now we look forward when the little gulls will learn to fly and leave the island. Most likely the first people who will see the ringed young birds will be the residents of Sozopol. If you see such bird, try to read the code on the ring. It is formed by the letter K and three digits after it.

Call us in the Natural-history exposition of Burgas Museum on +359 56 84 32 39, we look forward for any information that you can supply us with regarding the ringed birds. 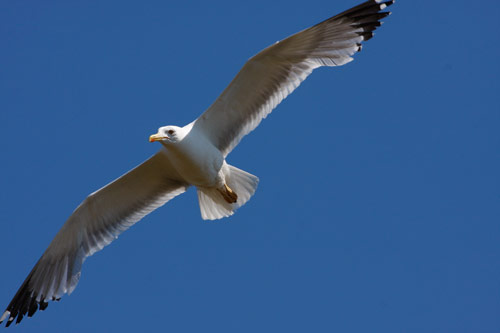 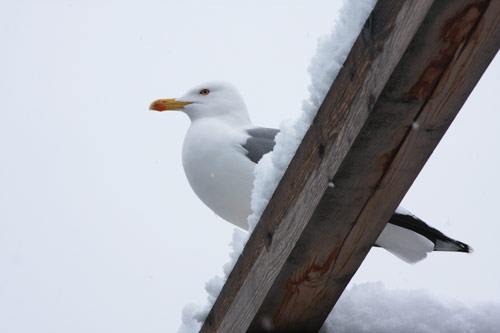 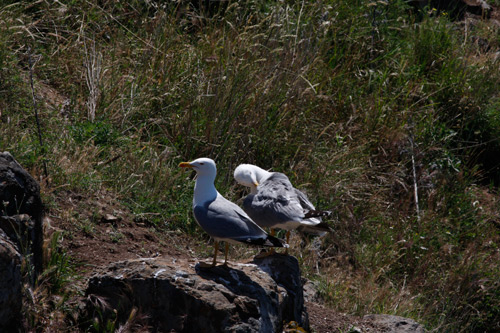 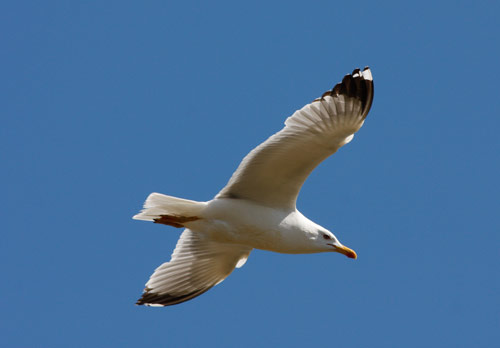 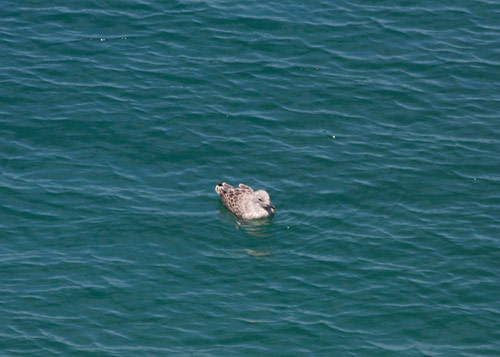 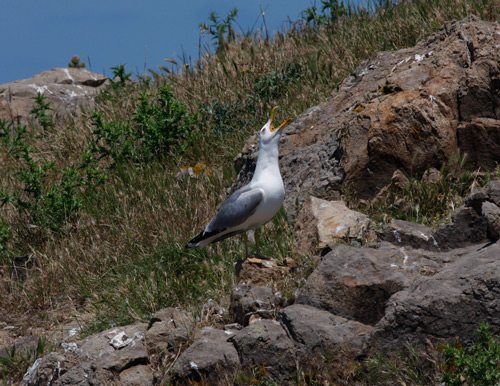 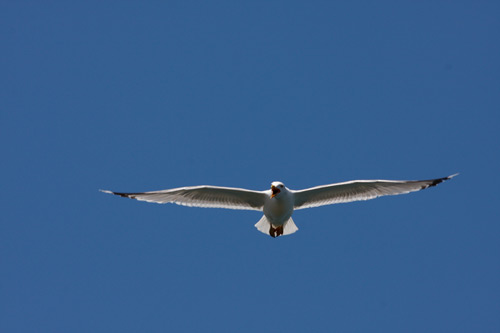 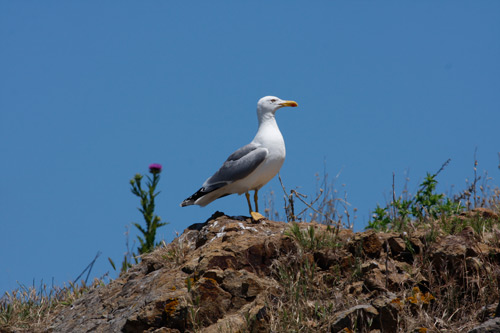 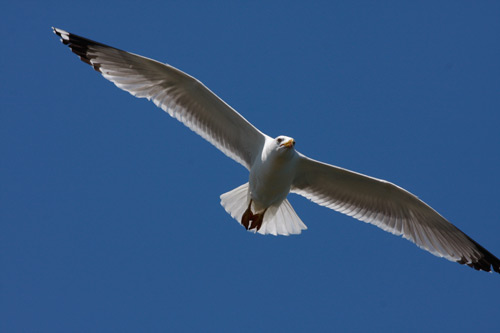 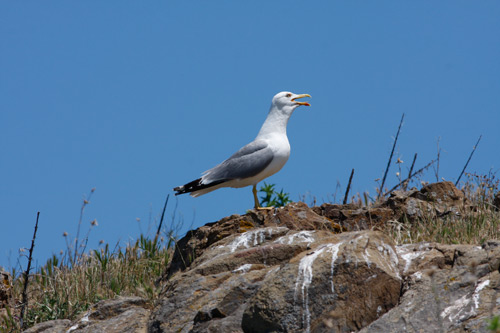 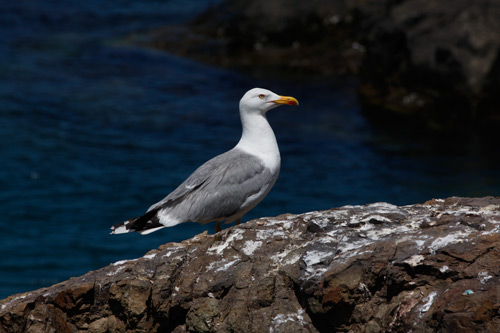 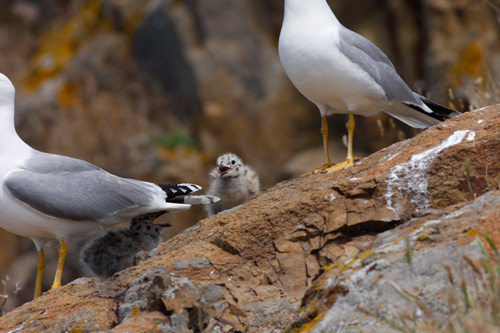 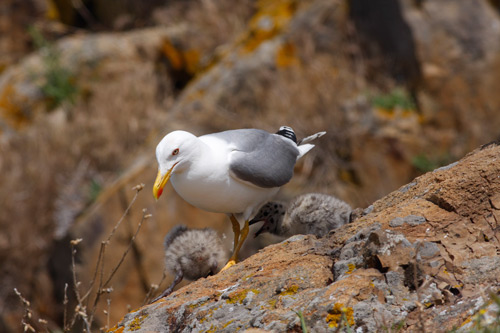 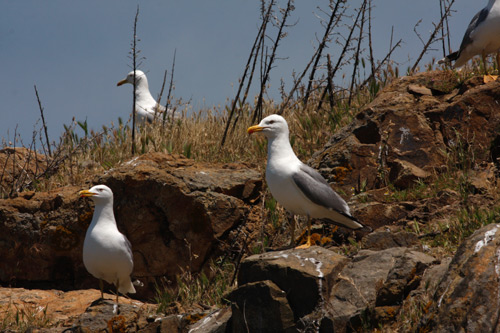 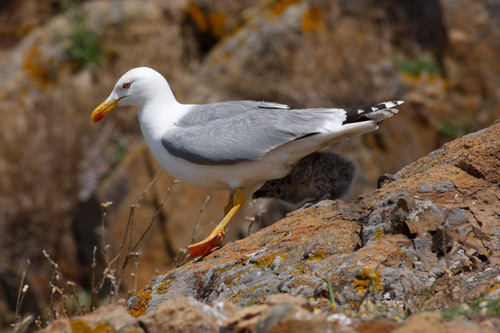 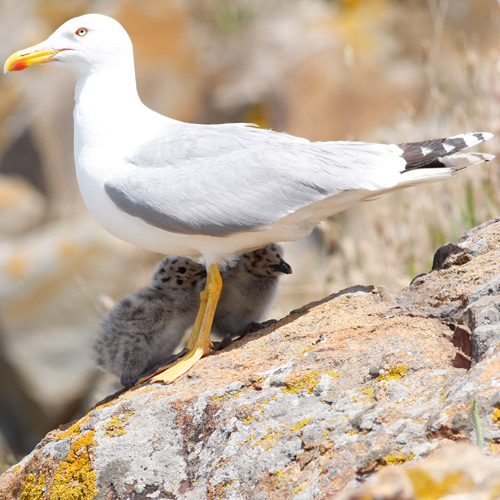 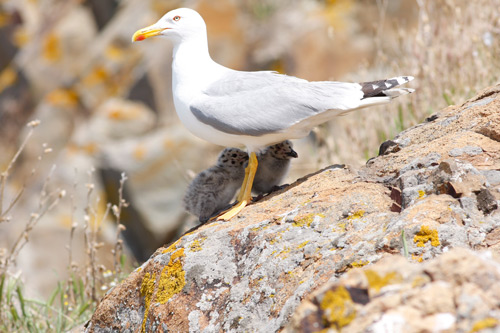 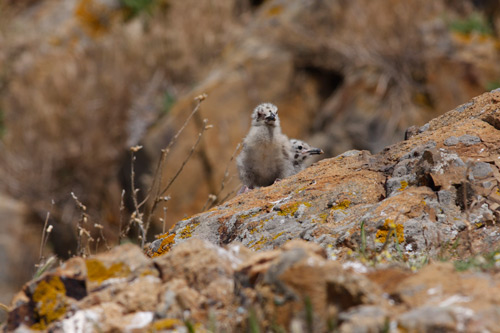 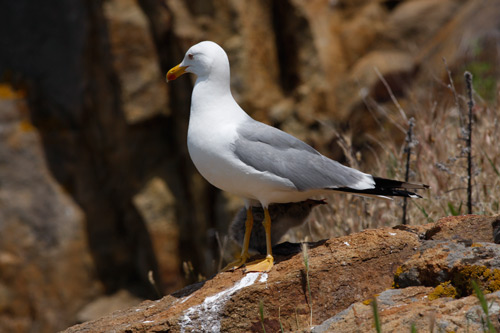 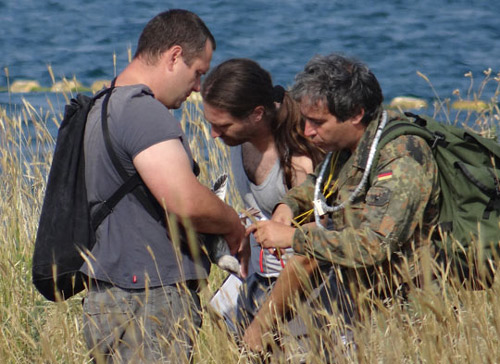 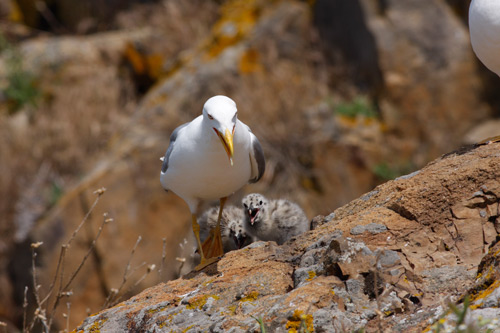 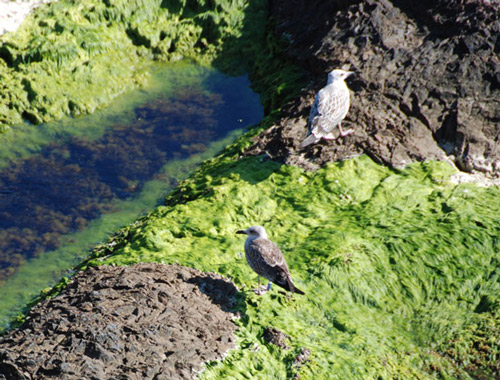 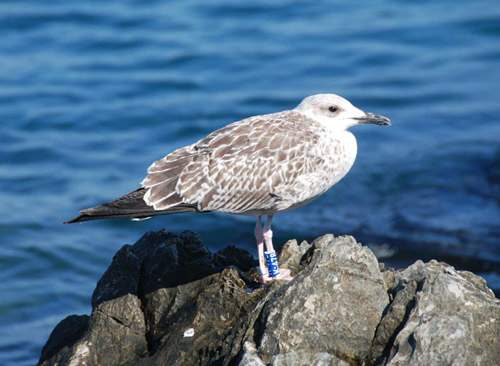