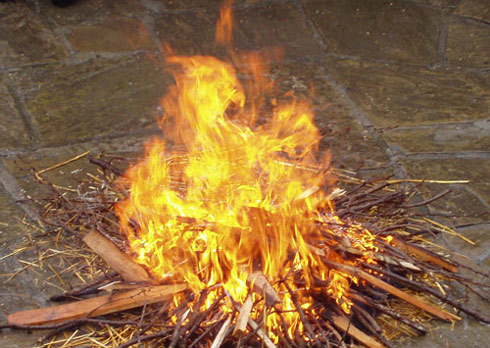 The days between Christmas and Epiphany (December 25 to January 6) are known in the Bulgarian tradition as "the dirty" (bg: mrusni), unbaptized or Karankoncolos' days. People believed then the barrier between the two worlds has fallen and the boogeymen and other dangerous creatures - vampires, goblins, fairies roam through the human realm. To protect themselves from these supernatural creatures during the 12 days, people observe many prohibitions. The most important is to not go out from sunset until dawn. This is why at that time of the year people don't go to the traditional evening gatherings.

Against evil and demons the clothes were stitched with garlic. Adults do not bathe because the water is unlit, and before a baby is bathed the water is cleaned with burning charcoal. Sexual intercourse is not recommended as the conceived children during that time were to become thieves or magicians.

Men clothes should not be sewn, else the wolves would devour men. But if a child is born, a new shirt is made for it immediately or a dragon would fall in love with it when it grows up.
It is believed that these days are unbaptized (pagan) and therefore during them Christian rites such as baptism, wedding, memorial service for the deceased, are not to be performed.

In southeastern Bulgaria on the day before St.Basil's holiday a big fire is set up in the center of the village. It is maintained for three days and three nights to purify the area. Everyone in the village throws wood in the fire and on the third morning the coals are turned and if they sparkle, there will be health and prosperity.

The last day of the so called Dirty Days of Unbaptized Days is Epiphany or Theophany. The night before the feast, the sky opens, the Lord Himself appeared to the gates of heaven and if you wish yourself something really important, it will come true!